Dampness in a property

Is it rising damp, woodworm
wet rot or dry rot?

We are independent chartered surveyors, which means we are not linked to or owned by an estate agent or lending institute, and as a result we are only working with your best interests in mind. Since we are solely surveyors, we can keep our overheads down and ultimately our prices as well.

Dampness in a property, what is it?

We were recently rung by an experienced property manager who advised they had a problem with one of their properties, could we help? She was going to get a builder to look at the problem as well.

Our concern with builders looking at problems is that they deal with the effect rather than the cause. We are not sure where she got the information from but the general consensus was that it was wet rot or dry rot, or possibly woodworm. If she’d asked a different builder then it may well have been diagnosed as rising damp.

Using a damp meter reader, does it tell you everything?

We visited the property and whilst it’s true we did use a damp meter reader, both a Protimeter which is probably the most common one, particularly amongst damp proof companies, and a Gann meter which we feel is more accurate. Damp meters only really confirm that there is dampness, which you can often see or smell, but they don’t explain the cause of the dampness.

In this case with the damp meter we obtained readings in the range of 40 to 60. People often say what does this mean, it means resistance as related to timber. However we use it on many other materials, as once you get to know and understand the resistance meter readings you get to know the typical readings for different materials 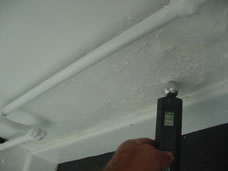 How dampness is occurring is always the important question

Let us first of all look at the other effects of dampness as it’s important as these can often look very bad and initiate quick action on the client’s behalf as they think there is such a big problem.

2. Peeling paint or (becoming more common these days due to the paints we use) a blistered paint.

3. Deteriorating plasterwork, particularly with a modern gypsum plaster. By modern we mean it was introduced post-war.

4. Timber deterioration and rot in one way or another.

As you can see, many effects things can be caused by dampness.

Understanding and establishing the cause of dampness 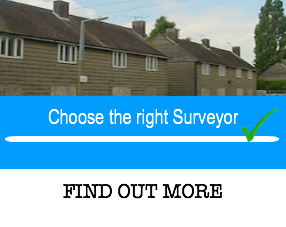 If this is your type of building the surveyor needs to be able to identify this and then follow a different trail as to what the problem may or may not be.

If you don’t know whether it’s a traditional or non-traditional built property, and they do look very similar (as was intended) then phone for a friendly chat on free phone 0800 298 5424.

Once you’ve established the era of property, in this case it was the 1950’s/1960’s and you understand whether it is traditionally built, depending on the age of the property you look for a damp proof course (often known as DPC). Damp proof courses first came into being under The Building Act 1878. 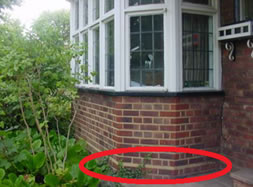 DPC shown in the thickness of the base

Often damp proof courses can be seen by the thickening of the mortar but sometimes you simply have to look very closely to see if you can see a dark edge in the mortar, which can often be virtually invisible to the entirety of the property and may be just possible to see it in one or two areas, such as around the doors where there is a change in ground level.

Again if you don’t want to spend your time doing this we would be more than happy to carry this out; free phone us on 0800 298 5424 and we will explain the different options that are available to you. 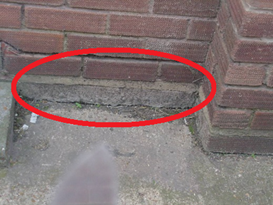 The garden of this property falls towards the house, particularly at the front. This is also known as a sloping site. This meant that any water when it did rain was being discharged against the building. To the front of the property this was where the deterioration was worse to the skirting boards, which was a mixture of wet rot and dry rot (it’s interesting, despite its name, how dry rot likes wet conditions). We could literally push a knife all the way through the timber. 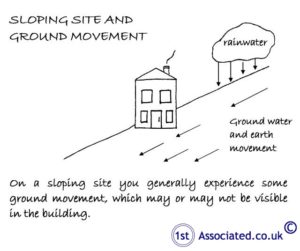 We have actually seen one case of rising damp that wasn't rising damp in an old property, which had been extended and altered over the years, and which has resulted in large areas of roofing discharging onto other large areas of roof (these being the extensions), which in turn made the gutters overflow whenever it rained heavily and discharge down the wall. This water coming down the wall met up with all the water coming off the garden where it had been paved and the nearby driveway where it had been paved, and this all resulted in water sitting against the base of the wall.

The effect was the rising damp in this case, the cause was the overflowing gutters, the patio and the driveway discharging the water against the walls.

Please see our articles dampness for a more detailed view.

Commonly, condensation is misdiagnosed as rising damp. Several clues to condensation: if there is a lot of humidity in the room and not very much ventilation, such as in a bathroom or a shower, where there isn't an extract fan, then it is likely to be condensation. If you can see a blackness to the walls, which some people would describe as mould, this is also condensation. The solution is to improve ventilation, which is ironic when we spend so much time and effort in modern properties stopping ventilation with plastic windows, doors, etc. Another way of getting rid of condensation, along with ventilation, is to add insulation. 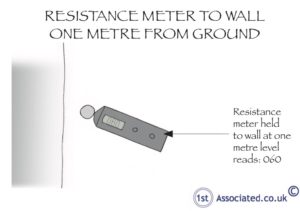 Lateral dampness, also known as penetrating damp or falling damp, as it is often caused by rain

This is where dampness comes through the wall and could be, for example, a rusted or cracked cast iron guttering or downpipe. We have also seen it where water has been held by ivy on the property and this causes spalling brickwork by the freeze thaw action of the water expanding and contracting as it freezes and thaws. We have found this quite frequently on Victorian and Edwardian properties close to bay windows, where the original two inch downpipe has either been blocked or replaced badly and is allowing dampness in. Therefore, this is an area that is worth looking at if this is the type of property you have.

Equally, we have found dampness to the valley gutter areas, where it can get into the walls, particularly where there is, for example, a butterfly roof, which leads into a hopper head, and this can often overflow and cause the water to discharge down the wall. Unfortunately, or should we say fortunately, there is a relatively easy way of checking this, that is next time it is raining hard you need to go outside and inspect how the gutters and downpipes are dealing with the water. 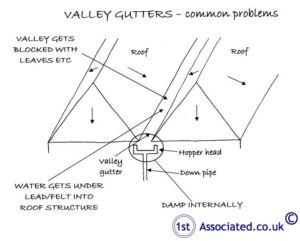 How do you remedy this?

You needs to stop the dampness at core.  We were looking at reducing the ground level around the property and also adding a land drain or a French drain.
Again you don’t need to worry about the technical side of things, if you do want to know more about French drains then please see our article French Drains or simply give us a free phone call on 0800 298 5424.

In addition to this, another factor was that the occupier’s weren’t aware of the humidity they were creating, particularly with young children and constant washing of clothes and cooking and the condensation was considerable, especially when they dried clothes inside. If at all possible you should dry clothes outside and/or make sure the moisture from your property goes outside as quickly as possible.

Remove moist air out of a building as quickly as possible

A general rule we have is to remove moist air out of buildings as quickly as possible and to make this as easy as possible, which is why we put in large good quality humidity controlled extract fans; see adjacent photo. These have a relatively clever design where they bring air in via a constant flow which helps to dry the room out, removing the moist air and discharging it to the outside environment. 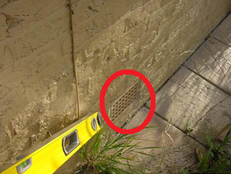 Over the years we have written literally hundreds of articles regarding surveying and property.  Here are a few we think will be of interest to you, but to see more go to our Free building articles page or phone us on 0800 298 5424.

Though investigations, talk to your neighbours

What we decided to do to resolve the dampness in the property was to:

1. Reduce the ground level around the property.

2. Check that the air bricks are clear.

3. See how the property dries out with an occupier that knows and understands how to live in the building

For example: the washing being dried in an outside area rather than within the house.

We pride ourselves on our professional standard and easy to read reports which we have been carrying out for many years on every age, type and style of property across the UK.

What do the ovals and circles in our building surveys mean?

Within our survey reports we use a system of ovals and circles on our photographs to highlight problem areas or characteristics within a property to better explain the issues. If this does not explain the issue completely then we can also use one of our sketches that have been commissioned exclusively for us for use in the building survey reports. 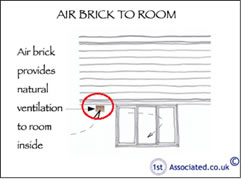 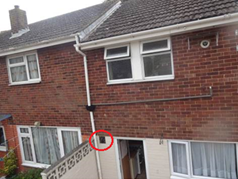 All rights reserved to 1stAssociated.co.uk