If you are thinking of buying a Non-Traditional House please call us on 0800 298 5424.  We provide independent help and advice with regard to independent valuations, property surveys, building surveys, structural reports, engineers reports, defects surveys and structural surveys matters.

We have carried out surveys on many different types of non-traditional construction.

What is a non traditional construction house?

Firstly, let us explain what a non traditional construction house is.  We would emphasise the word construction.  This is a system of building houses that effectively means the buildings can be mass produced. 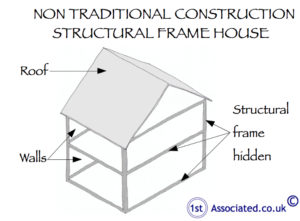 We suggest that once you have read this article you look at some other surveying articles that we have written on non-traditional construction:

The History of Non Traditional Building

These have a concrete plank externally supported on a pre-cast concrete frame with steel tube reinforcements.

Steel structural frame albeit that it is lightweight.  They tend to have cladding to the front of them.

Believed to be named after the contractor of that name.  Built on a concrete frame with more traditional brickwork or render typically found externally.

British Iron and Steel Federation House known as a BISF

These are relatively common although they are now very well disguised with brickwork being built around them.  They are a lightweight structural steel frame.

Although they are called Cornish Units, we have found them all over the country.  They come in various makes and models as do the other houses that we mention.  They were traditionally constructed with a concrete frame.  The unusual feature was the mansard roofs that ran all the way down to the first floor level.

They have a very well hidden structural metal frame.

These were pre-cast concrete panel buildings with a concrete ring beam at first floor level with a timber frame internally.

These were concrete panels which were a storey height secured by metal angle brackets (believed to be steel) with concrete beams forming the first floor.

This is pre-cast concrete, storey height columns with ring beams.  These have mansard roofs to first floor level.

This is a mixture of both a metal frame and a timber frame.

We have come across quite a number of these in our surveys.  This uses a lattice work of metal beams.

Comes in both solid and cavity wall forms built from a no fines concrete.

Possibly named after the contractor.  Again this is a steel framed building.

These are concrete panels.

A feature of these is that they may have a flat roof with an asphalt finish.

These are concrete column construction with a render or pebbledash finish externally.

Hollow panel.  These are structural concrete columns and beams cast in situ.

This is a good example of a large panel concrete house.

This is pre-cast reinforced concrete frame with concrete panels, two storeys in height.

Built with a timber frame.

Believed to be named after the contractor of that name.  Pre-cast reinforced concrete panels with ring beams at first floor level.

In situ mould type no fines concrete with a variety of different thickness of walls depending upon the age and type.

This is a brief overview of some of the non-traditional houses.  There are many, many different types.  We have surveyed ones where there are only a few thousand ever produced and we have also surveyed other types of non-traditional houses where there are many thousands produced.  In our experience as Chartered Surveyors they all need their own individual survey as they have their own unique problems.

We feel our surveys are quite unique, as they are written to your level of knowledge.  The surveys include photos and sketches and definitions.  The survey will also include an action required section and an estimate of costs in the executive summary.  We are more than happy to meet you at the property whilst carrying out the survey to discuss any specific issues you may have or have a general chat about what we have found at the end of the survey.  Please contact 0800 298 5424 for a Chartered Surveyor to give you a call back.

If you are interested in having a Structural Survey we can email you examples of our structural surveys please call us for a friendly chat on free phone 0800 298 5424.

We would also be happy to email you some examples of our tailor made reports, Schedules of Condition, Structural Surveys and Property Reports.  We have carried out surveys on many different types of non-traditional construction.

We can talk and talk about property

We hope you found this article on Non-Traditional Housing of use and if you have any experiences that you feel should be added to this article that would benefit others, or you feel that some of the information that we have included is wrong then please do not hesitate to contact us (we are only human).

The content of the website is for general information and entertainment only and is not intended to be relied upon for specific or general decisions.  Appropriate independent professional advice should be taken before making such a decision Free phone on 0800 298 5424 for independent surveying advice.

All rights are reserved the contents of the website is not to be reproduced or transmitted in any form in whole or part without the express written permission of www.1stAssociated.co.uk