We, of course, like to meet you at the property during the survey and we are more than happy to talk to you about the reports. Please free phone 0800 298 5424 for a friendly chat with one of our surveyors.

A very short history of windows and glass

If you really want to know about windows and glass then we recommend you visit our interesting people section on the www.1stAssociated.co.uk website and look at Charles Brooking and read through the many interviews. You should also set aside some time to have a look around the Charles Brooking collections at one of his museums or attend one of his interesting lectures on windows, doors and staircases.

The facts that we readily remember about windows and glass do not actually have anything to do with glass in one sense. The term Daylight Robbery, we recall being told, was introduced to describe the tax on windows which lead to windows being blocked up to save on the taxes. However we have since read this is not true at all! Whether this term is true or not, many people in the property industry would say that we cannot get the use of glass and windows right in commercial properties. The problems that we still come across have been around for many years but we never seem to learn from them.

How the great fire of London changed windows forever

It is said that the reason that windows now have window sills is to stop fires travelling from one floor to the next via the windows. The window was further amended by being set back into the brickwork.

You can read more about how buildings have changed over the years in a book called Lust for Window Sills written by Harry Mount and published by Little, Brown. We found this on one of our many visits to a National Trust property.

The following sketches and photos give a brief outline of how windows have changed over the years. The changes were basically brought about concern over fire.

1. The materials they are made of

Over the years we have made windows from metal, wood and plastic and we have been on a learning curve with each of these materials.

The metal windows that most people remember are the Crittall windows and which is almost a generic name but is in fact the manufacturer's name. We have identified that if metal windows are not maintained they will rust, warp and twist. They often allow condensation to occur.

Crittall windows are very much from the 1940's -1960's but they are still produced today.

There was a second revolution in metal windows when aluminium windows were made in the 1970's -1980's. We still come across early forms of double glazing made from aluminium.

Timber windows are generally great but it does depend upon the quality of the timber. we find that older windows are well worth saving whereas newer windows from the 1970's and 1980's tend to rot unless very well looked after. we find it ironic e that many of this poorer quality timber is being used in modern housing and argued that it is Eco friendly when in fact it just means it has to be replaced (many people will replace with plastic) within five years. 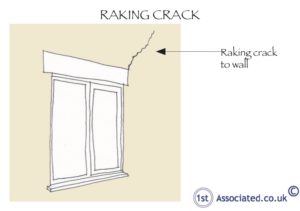 Plastic windows have improved vastly over the years.

The common problems we come across is structural movement in a property where windows have had a structural significance and have been removed, for example, a large timber window has been removed and replaced with a plastic French door or similar. We then find that we tend to get dropping of the lintel and brickwork or cracking of the render.

We come across similar problems with bay windows where a plastic window has replaced a good quality timber window and the plastics have been measured slightly incorrectly and some settlement has occurred.

Within this context we come across windows that have never been decorated since the day they were put in and plastic windows that have never been cleaned since the day they were fitted. You do need to remember to maintain your windows. You also need to think about window cleaners and how as well as cleaning the windows they can cause all sorts of damage to a window and also the roofs below that they may balance on.

As we understand it from memory a window means an opening to the world outside. Originally it would literally have been just that, an opening, or it may have had a cloth covering or boarding forming shutters. Eventually as glass developed this was set into metal windows made by the blacksmiths of the day. Only the wealthiest people had glass and even when it became more available we remember reading that it was still expensive and a rarity. This meant that when you moved house you moved the windows as well. This was why and where the pin hinge came about as the windows could be lifted on and off of these hinges. Don't think too hard about this as we are sure there would have been all sorts of problems with different sizes of windows etc.

The Great Fire of London

If you truly do want an independent expert opinion from a surveyor with regard to structural surveys, building surveys, structural reports, engineers reports, defects report, including things such as cracks, dampness, condensation, foundation call Free Phone 0800 298 5424 for a surveyor to give you a call back.